Dad Yash Puri threw together his Papa Penguin website after finding himself cast as a role model for taking Shared Parental Leave. “I’m not trying to be a role model,” says Yash Puri. Which is a shame, because he is one.

Just by taking Shared Parental Leave (SPL) he immediately became a role model. Particularly as he works in the high octane world of financial services.

A previous boss congratulated him but, tellingly, reckoned Yash was taking a risk by taking time out of the workplace to look after his son. Yash, recently returned to work after three months of SPL, sees it differently.

“I didn’t take SPL with my daughter but we decided I would with my son. My wife got to do what she wanted in that time, I could see my son and daughter interact. We spent time as a family, including travelling around the UK attending family friendly festivals where Peppa Pig and Mr Tumble were always at arms reach and a budget trip to America. I went to look at schools for my daughter along with my wife and I just felt more hands on.

“It was a challenge taking the time because people think it’s not the done thing. But if a senior person like me does it then it sets an example to my colleagues and my network.” Talking up his experience of SPL on LinkedIn got him spotted by a BBC journalist looking to speak to someone about millennials’ thirst to be more involved dads.

Contributing to that article got Yash noticed. “The amount of contact I had from people saying we need more role models was amazing,” Yash says. “I decided I had to do something off the back of that, it’d be a waste to leave it hanging.” And so he threw together a website. But what to call it?

“I thought about who my role model is,” he explains. “And I remembered seeing the emperor penguins on David Attenborough’s Dynasties series sharing the childcare, the dad looking after the chicks while the mum went off to find food. Hence the name Papa Penguin!”

Yash felt the need for more role models personally. Partly due to his upbringing, and partly due to the attitudes he encountered through taking SPL

He explains, “Being first generation, born in the UK, Indian-British I’m aware a lot of us take our parents culture of work, work, work. I look at all my networks and our parents have this ethos that you have to work really hard to do the best for your kids. It’s not that they didn’t want to be good dads back then but it was different. I’m all for those qualities of drive, ambition and working hard. But it’s also OK to take some time out for childcare.

“Hopefully my kids will see what I’ve done and they’ll want to do the same when they’re older.” 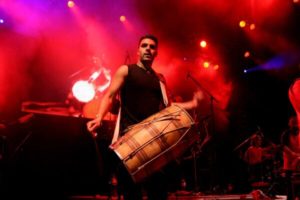 But he’s also changing attitudes now. One colleague told him he was really lucky to be able to take three months of SPL. “It’s not about luck, it’s a legal right!” responded Yash. Another former colleague said he felt like a failure after reading the blogs on Papa Penguin. He realised he’d missed out on some of his daughter’s childhood. “It’s not about making anyone feel a failure,” insists Yash. “That guy can make changes now. I’m not saying that you must do it like me, but I hope that by sharing different stories people will think about it a bit more.”

The experiences on Papa Penguin include dads that work full time but ensure they make time for family, more men on Shared Parental Leave, and fathers that have taken the plunge and become stay at home dads.

Yash works flexibly now, starting or leaving early or late according to the demands of nursery drop off and pick up.

As well as role models he thinks corporate culture needs to catch up with millennial dads’ attitudes.

Yash has heard from other dads there is still unconscious bias in the office space when dads have to leave early and get called part timers. He adds, “Lots of companies are doing great stuff, particularly in financial services. But the companies need to make their policies more visible. And the people that take advantage of those policies need to advertise what they get out of it.

“Visibly it looks great, all these new policies. Culturally we’re not there yet.”

His rallying cry for changing dads culture is odd, but it might just catch on: “Be more penguin!”